The Woolworths AGM on November 16 in Sydney was a good opportunity to put the retailing powerhouse through its paces about pokies, succession planning and even the forthcoming Rudd Government's prices inquiry. But first, look at this disgraceful picture from one of my local pubs. 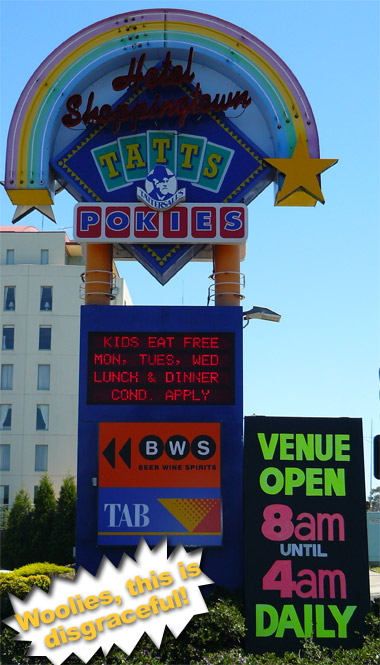 Woolworths has become a seemingly unstoppable retailing juggernaut in recent years and they had a great financial story to tell shareholders at the AGM. But that didn't stop lots of whingeing about all sorts of things in what was a pretty low quality debate for much of the three hours.

Crazy Jack Tilburn spoke for longer than anyone, as usual, and this recent video we made on him was far more interesting than anything he had to say had Woolies - although his complaint about the non-disclosure of proxies hit the mark.

There was almost 1000 shareholders at Darling Harbour so there was only one opportunity at the microphone during general questions. I offered up a double header, asking about the prospect of a regulatory backlash from a Rudd Government and whether Woolworths did anything to mitigate damage caused by its vast poker machine operations.

What happens at the Shoppingtown Hotel?

The Shoppingtown Hotel is a watering hole in Doncaster near The Mayne Report bunker which ruthlessly exploits problem gamblers.

I told the AGM about signage which encourages parents to bring children to the hotel (discounted meals, Wiggles shows) and maliciously exposes them to poker machine gambling, a most addictive and socially destructive means of making a profit. Entering through the main entrance to either the play area or the dining room means families pass by the gaming area. This is in line with CEO Michael Luscombe's declared intention at last year's AGM to bring families into Woolworths hotels.

Woolies knows the danger of the addiction to poker machines by the many signs in the car park warning people not to leave their children in cars. However, there is no signage for self exclusion, which is not required in Victoria so, unlike Queensland, they don't do it. This continues former CEO Roger Corbett's hypocritical stance that unless the law requires it they won't do it.

Naturally, ATM machines are placed close to the poker machines, something I'm arguing to the people of Higgins that Peter Costello should expressly ban, as you can see in this flyer that can be printed out and distributed to voters before Saturday.

Michael Luscombe vigorously defended the Woolies pokies operation and corrected my number of 6000 by pointing out the company operates 11,000 - but this is only 6% of the total across Australia.

He cited things such as natural lighting and clocks in gaming areas - but also made the extraordinary claim that lotteries produce just as many problem gamblers as pokies. This is just complete rubbish - all the research shows that pokies are easily the most addictive and damaging form of gambling available to Australians.

Listen to Luscombe's full response on the pokies issue here.

The guy clearly hasn't read this insightful report by Dr James Doughney from Victoria University explaining how poker machines are easily the most pernicious form of gambling hurting Australians. This Woolworths product is causing enormous damage but they remain in complete denial.

Debonaire Woolworths chairman James Strong handled the AGM with great aplomb as usual but we caused him a couple of uncomfortable moments during the director elections.

I got up and gave former Reserve Bank governor Ian Macfarlane - who was sporting a Woolies check out badge declaring him to be "Ian" - a big pat on the back and suggested he would one day make a good chairman.

Strong claimed I was his "campaign manager" but was then drawn into the debate about succession planning and "took the bait" on the issue about which chair he would have quit had the contemplated pitch to become the next Qantas chairman materialised.

Strangely, Strong denied ever "running" for the Qantas chair and blamed all the speculation on a mischievous story in the media. He was being too cute by half here because while not formally nominating, he clearly was interested in the job.

He announced his withdrawal in this interview on Lateline Business on August 1, opening up with the following:

JAMES STRONG: No, I've given it a lot of thought. When I spoke to the boards of IAG and Woolworths, I said that I'd give it serious thought. Some people pointed out to me that this was a very important role that I had and both of those companies are really dynamic companies and doing very well with good management and a very good board and so on. So, I said that I'd give it very serious thought and clarify my position. And I've announced to both boards today that I won't be a candidate.

It was fair enough to ask just which board would have been surrendered had Qantas materialised but he wasn't about to enlighten us Woolies shareholders.

Ripping into the Parrot

The most enjoyable element of the Woolies AGM was ripping into The Parrot, aka Alan Jones. One shareholder asked James Strong why "a certain broadcaster" continued to regularly attack the retailer.

CEO Michael Luscombe admitted to meeting The Parrot and providing detailed briefings, but it didn't seem to change the on-air attacks. James Strong was equally critical of Jones - which was a touch hypocritical given that he was the Qantas CEO back in the days when those notorious cash for comment deals were reached in the late 1990s.

The next time I got to the microphone it was a pleasure to brief the meeting on the Macquarie Radio AGM earlier in the day when The Parrot had been pilloried for his appalling conduct. There was much support for the notion that it was a "disgrace" he remained on air after inciting the Cronulla riots in 2005.

Exposing the "no vacancy" board rort

This earlier video on WA News criticised the "no vacancy" rort used by boards to fend off outside candidate, so it was good to Woolworths a spray given they use exactly the same tactic. However, Woolworths is the most relevent company on this issue because they used to welcome all comers and this meant I almost got elected in 2000.

Their response was to change the constitution in 2001. Have a listen to this lecture the board copped last Friday about this rort.