Rio board lashed in Sydney but Sir Rod survives

The Rio Tinto board copped a comprehensive three and a half hour lashing in Sydney this morning that was dramatically more aggressive than the three hour meeting in London last Wednesday.

One Rio director commented after the meeting that the media's portrayal of London as a bloodbath was "a disgraceful beat up" whilst acknowledging that today there was real anger in the room.

About 20 different shareholders spoke and the vast majority were articulate, negative and focused on the business issues. For the first time in Rio's history there was only one "minority group" shareholder who spoke, a lady who didn't want Rio to repeat the alleged efforts of Bougainville Copper in 1964 which negotiated access to the abandoned copper mine with men claiming to represent the land owners when it was really owned by the local women.

There were numerous rounds of applause as various different shareholders let fly at the board over the disastrous $US45 billion (including debt) Alcan acquisition, the Chinalco sell-out, the lack of boardroom accountability and the ridiculous workload of people like Sir Rod Eddington.

The opening speaker was an English Australian called John Hook who presented a magnificent demolition of everything the board has done whilst speaking with a similar plummy accent to out-going chairman Paul Skinner.

Skinner stuck on the dunce's chair to the bitter end

I opened up with a request to chairman Skinner that he get Rio off the dunce's chair when it comes to shareholder communication and actually start doing the basics such as webcasting the AGM, allowing directors up for election to speak and displaying the proxy votes before the poll. Alas, he did none of it, despite several other shareholders also requesting that he allow for a show of hands on the resolutions to gauge the mood of the meeting, which was very dark indeed.

The only insight we got into the proxy position came when Sir Rod Eddington was up for election and Skinner took my bait and declared that Chinalco had voted its 120 million shares in favour of all the directors and Sir Rod would have survived even without the support of the Chinese government.

However, that wasn't strictly true because the results were released at 4pm and showed a stunning 35% protest vote and Sir Rod would have been down and out with 47% if the Chinese Communists had voted against him. Therefore, we literally have the Chinese Government saving Kevin Rudd's closest business adviser from losing his Rio board seat.

Whilst Sir Rod did make a couple of contributions to the meeting on his board attendance and in explaining the selection process for finding the new chairman in the absence of nomination committee chair Andrew Gould, he wasn't allowed to defend himself over the $5 billion lost in the Allco collapse.

Indeed, chairman Skinner didn't appear to know what is going on as he introduced Sir Rod as an Allco Finance Group director whilst not mentioning several of his other gigs. I pointed out that Sir Rod has been off Allco for six months since the board called in the administrators but then backed up Stephen Matthews from the Australian Shareholders' Association in arguing that his Allco record warranted an against vote.

The stronger argument for voting against Sir Rod was actually presented by the incoming Rio Tinto chairman Jan du Plessis who proudly declared to the meeting that last Friday he'd quit the board of bailed out British bank Lloyds TSB, where he chaired the audit committee through its implosion. Similarly, he promised to also stand down as chairman of global tobacco giant BAT by the time of next year's Rio Tinto AGM, leaving a position on the Marks & Spencers board as his only other corporate gig.

If only Sir Rod had taken such a position when he was unveiled as chairman-designate of ANZ last year. I told the meeting it was baffling why Sir Rod had chosen to stand for another term at Rio when he is the busiest man in Australia, has conflicts of interest that meant he couldn't even vote on the Chinalco deal and was as responsible as the other directors for the Alcan fiasco.

Chairman Skinner came back with the claim that he is a great director, which answered nothing on the question of the Allco fiasco. After giving Skinner one final spray towards the end of the meeting about the complete lack of accountability from all these snooty British lords and knights on the board, it was amazing he came over for a polite 5 minute chat after the meeting. Stiff upper lip and all that, old boy.

Meanwhile, check out this big piece on the Rio AGM I wrote for the Fairfax websites.

Anti-pokies campaigner Paul Bendat was one of the original backers of The Mayne Report although he departed 18 months ago and has spent much of his time since campaigning to have children banned from all pokies venues across the country through his website, www.pokieact.org.

Friday was a big day in that campaign when Senator Nick Xenophon and Tim Costello joined Paul in Adelaide for the launch of his book, a pictorial on the way Coles and Woolworths try lo lure kids into their pubs across the country.

It had a big impact, especially with the Queensland media, as this blog post by Paul on Saturday morning explains. The campaign launch even ran on The Wall Street Journal's website as you can see here.

Lo and behold, The Australian's Rebecca Urban came out with this hatchet job on page 3 today claiming Paul was a hypocrite because his father once owned shares in Perth's Burswood casino.

The opening paragraph read as follows: "Anti-gambling crusaders Nick Xenophon and Tim Costello launched a new push against poker machines unaware one of their fellow campaigners owes much of his family's wealth to casinos."

BRW claims Paul's dad Jack Bendat is worth about $600 million and if you crunch the numbers on that Burswood investment it would struggle to amount to 1% of his wealth. Besides, it wasn't Paul's investment, he was living in the US at the time and he has no idea what shares his father buys. And even if he did, Burswood actually has Australia's most benign pokies which requires players to stop and think. If only Woolies and Coles had the Burswood version rather than the lethal varieties they've rolled out in all the other states.

The Australian owes Paul Bendat an apology for this hatchet job. It is not often a genuine corporate player with some wealth gets behind a social cause such as the pokies, but when Paul Bendat emerged all Rupert's national broadsheet can do is stitch him up. Let's hope this has nothing to with the tens of millions that the pokies pour into Rupert's NRL black hole each year or the fact that Australia's biggest pokies player, Woolworths, also happens to be News Ltd's largest Australian advertiser 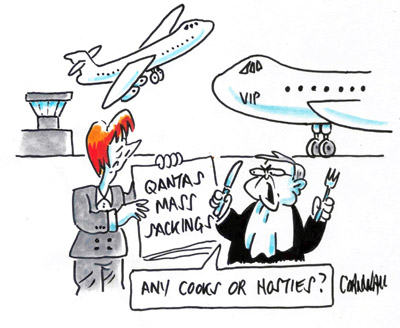 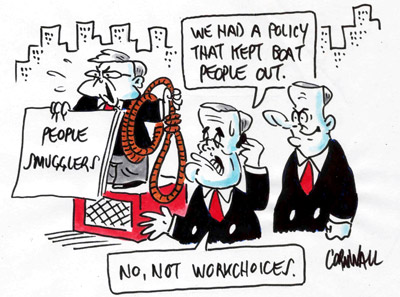 That's all for now. The flight from Sydney is about to board and we'll be back with a full edition on Friday.

* If you're reading this without being a subscriber, why not sign up for a free trial. Alternatively, if you've had enough, click here to unsubscribe from this email list.