The market has just closed with Rio Tinto's market capitalisation plunging by 34% whilst BHP Billiton gained 4% – an overall 38% swing in relative value.

Never before has an Australian listed company declined by more than $30 billion in one day, but Rio Tinto now finds itself capitalised at $61 billion, versus $153 billion for BHP. I can't recall a time when BHP Billiton was capitalised at more than 2.5 times its traditional Australian rival and today's move are an indictment on the BHP board for taking so long to abandon something that was clearly an absolute disaster from a shareholder perspective.

Then again, this board blew up $30-40 billion in the Billiton merger, so why should we be surprised they tried to do it again by offering 44% of the shares in the combined group to Rio Tinto shareholders, similar to the 42% of BHP that Billiton shareholders burgled in 2001.

Where were the commentators attacking BHP?

Whilst the Melbourne business commentators were incredibly timid in holding both BHP and Rio to account, the knives are now well and truly out.

Indeed, Business Spectator's Robert Gottliebsen even agreed to make a joint production DVD with BHP bosses Don Argus and Marius Kloppers which was mailed to shareholders with the notice of meeting. We've edited down the highlights into this video, which now looks like an embarrassing collaboration given the debacle that has unfolded.

For mine, Gottie should be calling for Don Argus to resign, but his Business Spectator website is still yet to even report there is an outside candidate running for the BHP Billiton board, let alone note the anti-Argus candidacy attracted a much-higher-than-expected 17% of the vote worth $7 billion, as we explained in this morning's edition. Former Westpac CEO David Morgan is tipped to be the next BHP Billiton chairman and he should take over tomorrow.

Why can't the business media just call it like it is, rather than cosying up to their subjects?

Business Spectator should also have been condemning the proposed appointment of Sir Rod Eddington as ANZ chairman, along the lines of this Allco exchange on Sky News Business a couple of weeks back. At least former RiskMetrics researcher Adam Schwab let fly in Crikey today given that Sir Rod is also a Rio Tinto director who approved the crazy Alcan takeover last year.

Instead, just as Allco Finance Group was collapsing, we had this cosy video chat with Sir Rod to commemorate Business Spectator's first birthday.

Contrast that with this hard hitting commentary by Michael Pascoe about Sir Rod on the Fairfax websites yesterday is a much better example of where business journalism should be at in Australia.

I've been hitting the airwaves hard today, blasting BHP and calling for some boardroom accountability at both companies given they proposed spending $7 billion on this merger if consummated and actually burned through about $1 billion pursuing something that has been an obvious lemon for many months now. Have a listen to the following and the Glover interview focuses most strongly on all those ridiculous fees:

Listen to interview with Steve Chase on ABC News Radio.

The old Realestate.com.au has changed its name to REA Group and we had some very lively debate at the AGM in Melbourne today, which included co-founder Karl Sabljak weighing in with some piercing questions about the sacking of CEO Simon Baker.

We only got a 4 minute address from chairman Richard Freudenstein, but between three combative shareholders managed another 38 minutes of very lively and hard hitting debate which culminated in director, largish shareholder and Sydney real estate agent John McGrath declaring it was the best board meeting (sic, it was the AGM) he'd even been to. Have a listen here.

REA Group is a cash cow that has never paid a dividend and independent observers reckon News Ltd is preventing payouts to depress the share price and facilitate a mop-up of the 40% it doesn't own.

Whilst this might be touch cynical, the board got the message loud and clear today about dividends and former Chanticleer columnist Ivor Ries, now a broker at Ballieus, explained to Freudenstein after the meeting that 90% of institutions can't hold shares that don't pay dividends.

Shareholders were told it was a unanimous board decision to sack Baker and the chairman, after praising him to the hilt at the start, had a crack at him when I pointed out that Baker had blogged on this website yesterday suggesting it was a mistake to close the New Zealand business when it could have been sold to extract some value for shareholders.

Here are the audio highlights from the REA Group AGM:

The sacking of CEO Simon Baker – was it unanimous?

Why didn't we sell rather than close New Zealand business?

Do either Sam White or John McGrath have margin loans on their shares?

Why don't we charge real estate agents more for our great service?

Do you think the international expansion has added any value and should we have just stayed in Australia?

How are we leveraging off the News Ltd relationship in the UK and US?

Why does only a minority of the board own shares in this company?

How Centro botched its proxy form

This morning's edition rather cheekily did not present the full facts in this line:

The logistics tomorrow are going to be very tricky. I'm running for the Centro Retail board and have actually been endorsed for the first time by powerful proxy advisor Risk Metrics. The AGM starts at 10am and chairman Paul Cooper rang yesterday to say that he'd be voting open proxies in favour of my nomination.

Now I should disclose the reason for Cooper's decision. Centro Retail doesn't really want me as a director. Indeed, the Centro parent will be voting close to 50% of the stock on issue against the nomination.

However, the debt-struck company is clearly under pressure and botched their shareholder mailouts. This is what they wrote in the notice of meeting: 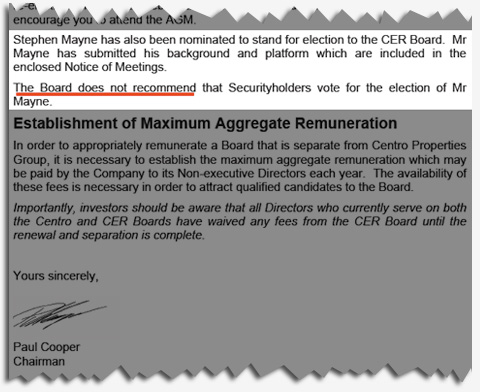 But this was contradicted in the accompanying Centro Retail proxy form on the last page of the mailout:

Centro Retail chairman Paul Cooper explained yesterday that it would be inappropriate to contradict the proxy form advice, so for the first time in 31 board tilts, I'll be getting the undirected proxies in favour. Not that it will make much difference to the result, of course.

However, when you consider that undirected proxies voted against made it statistically impossible to get elected in about 20 of my past tilts - even with 100% of the undirected proxies in favour - it is nice to finally have this average 10% sitting in the chairman's back pocket being used in my favour for a change.

Pokies issue to move from Canberra to Woolies AGM

Senator Nick Xenophon and pokieact.org backer Paul Bendat held their joint press conference about Sky Channel censorship this morning and it was picked up by ABC Online. The caravan moves back to Melbourne tomorrow when there'll be a protest outside the Woolies AGM, urging the retail giant to keep kids out of their pokies venues. Australia's best known professional anti-pokies campaigner Gabriela Byrne will be leading proceedings.

I'll be attempting to slip a Woolies appearance into the mix between the Centro Retail and BHP Billiton AGMs tomorrow but it won't be easy as they all start within an hour.

Proxy advisory house RiskMetrics is about to release a paper on the continuing scandal of excessive termination payments in Top 100 companies. It's sure to kick off a political bidding war amongst the parties positioning themselves on executive pay issues.

Have listen to this interview with Fran Kelly on ABC Radio National yesterday for an example of how this issue will really escalate in the coming weeks.

And doesn't it stink that the current ASIC chairman Tony D'Aloisio, plus Greg Gailey, the current Business Council of Australia President, together pocketed $20 million in overblown termination payouts from ASX and Zinifex respectively.

Those golden goodbyes were never put to shareholders for a vote but these two chaps are now running the corporate plod and the CEOs' union. Even John Story, president of the Australian Institute of Company Directors, doesn't look good given his record at Tabcorp and Suncorp, which have been hit with withdrawn pay resolutions and huge remuneration report protests over the past three years.

We all remember that AMP parted company with Jim Reid when he dared to ask Rupert Murdoch about the destruction of value in a briefing at News Ltd's Sydney office last month.

Sadly, Citigroup appears to have a similar attitude based on this Bloomberg update on the wires today:

The companies include Asciano Ltd., Auckland International Airport Ltd. and Connecteast Ltd., Citigroup Australia said in a note to clients. The bank has cut active analyst coverage of Australian companies by 18 percent since the start of October while New Zealand analysis has been more than halved.

Shares in Asciano, Australia's biggest port and rail operator, slumped 60 percent on Nov. 11 after Magotra recommended investors “cut their losses” and sell their stock. The slump cut A$720 million ($466 million) from Asciano's market value, prompting the Melbourne-based company to request a trading halt and issue a statement saying it didn't need major financing for 18 months.

This bloke was a dead man walking from the moment he posed for The Australian's front page picture accompanying this story on November 13. No doubt the reporter and photographer failed to explain the risk to the lad when negotiating the picture, so let's hope his payout is enough to eliminate any Citigroup home loan over that nice house featured on page one.

The special $99 six month subscription offer is attracting some interest so take it up whilst it lasts or at the very least lock into a free trial.